✔ admin at Tuesday, January 31, 2017
Tags
Entertainment
Though you are strong, sometimes you may become weak because of some personal situations. At that point, you may be looking for best inspirational Songs in English, Hindi and Telugu. Below are the list of Telugu inspiration songs that boost your motivation: 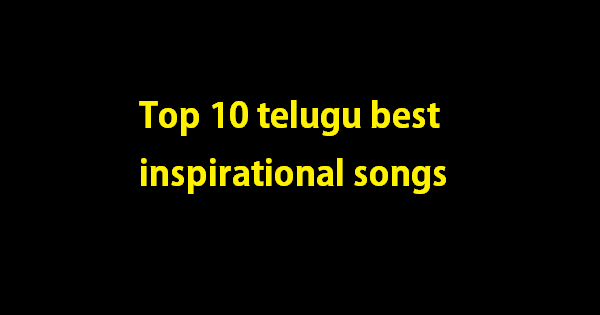 This  song is the best inspirational song ever from the Chukkallo Chandurudu Movie starring Siddarth, Charmi, Sada which was released in 2006. The music was composed by the late Chakri and song recorded by the Siddarth. The lyrics was penned by Bhaskar Batla.

You have to live this life as you wish because once the time passes you can roll back. If you believe yourself, you can touch the sky. Sea waves are the best inpiration for me, even if fall down, I'll get up again. Sky is your limit, don't let slip any opportunity that you have. You don't have any doubt that you won't take along with you after dying.

Aata is a song from the Aata Movie starring Siddarth, Ileana D’Cruz. The movie was released in 2007 and music composed by Devi Sri Prasad. The singer of this song is Shanker Mahadevan and the lyrics was given by Siri Vennala Seetha Rama Shastry.

This song is a true inspiration; you don’t need Alladdin magic pot if you have a strong will to accomplish your goal. You need to know the death of the sea before you start your journey. If you do this then you can achieve everything in ease

Chal Chalo is a song from the Son of Satyamurthi starring Star Allu Arjun and Samantha. The movie released in the year 2015 and music composed by Devi Sri Prasad. The singer of this song is Raghu Dixit. The lyrics was penned by Ramajogaya Shastry.

This song is about that there no guarantee that you won't face troubles in your life. In every chapter of your life, you'll need be ready to face the challenges. The people you did hard work in their life are successful, you won't find people you have succeeded in their life without hard work. There might be ups and downs in your journey but they will your best experiences in your life. you have to be patience as well as learning from your each experience to be successful in your life

Yahoo Yahoo is a song from the movie Mirchi starring Young Rebel star Prabhas, Anushka Shetty, Richa Gangopadhyay. The movie was released in 2013 and music composed by Devi Sri Prasad. The singer of this song is Mika Singh. The lyrics was given by Ramjogayya Shastry.

The song is about leading a happy life though you failed or took a bow sometimes. You don't find exact meaning of life in Oxford dictionary, then why you try to find it, Celebrate the life and live a happy life

Inthe Inthe is a song from the Balu Movie starring Pawan Kalyan and Shriya Seran. The music was composed by the Mani Sharma and song was recorded by Kay Kay. The lyrics was penned by Chandra Bose.

Everything will be a simple and small thing in your life, if you think everything as small.

Kannu Theristhe Jananamele is song from the Nenu Meku Thelusa movie starring Machu Manoj and Sneha Ullal. The music composed by the  Achu and song recorded by Naveen, Ranjith. The lyrics was penned by Siri Vennala Seetha Rama Shastry.

Run Run Song is a from the Bruce lee starring Ram charan and Rakul Preeth Singh. The music was composed by SS Thaman and the singers are Sai Charan, Nivaz. The lyrics was penned by Sri Mani.

Vasantham Edi is a song from the movie Sneha Geetham starring Sundeep Kishan and new actors which was released in the year 2010. The lyrics was penned by the Chinni Charan and music was composed by Sunil Kashyap, Chinna.

Today's failure is a form of tomorrow's victory, the song goes on saying the examples. Sun will not rise only after the night etc,.

Traveling Solider is a trend setting and inspirational song from Thammudu movie starring Pavan Kaylan, Preethi which was directed by P N Arun Prasad.  The song was penned and the music was composed by Ramana Gogula. The lyrics was penned in English.

Look at the face in the mirror and I wonder what I see, I just wanna be, what I can be. If you say I'm failure, you have wait and see what I can be

This song is from the Idiot movie starring Ravi Teja, Rakshita directed by Puri Jagannath which was released in the year 2002. The music was composed by Chakri and also this was sung by the Chakri. The lyrics was penned by Kandikonda.